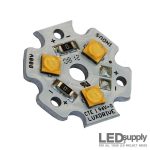 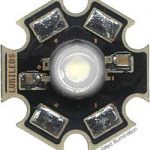 One of the first LEDs to be called a high-power LED was the Luxeon I Star, made by Philips LumiLEDs in 2006.  At that time, these 1-watt LEDs were approximately 50-lumens, retailed for over $6.00 and were a major break-through in LED technology.  And so the trend began, year-after-year, LED companies like LumiLEDs, Nichia, Osram and Cree improved upon the last by inventing new technologies and materials that have created exponential growth.  Take for example the new Cree Xlamp XP-L LED, which is the first commercially available single-die LED to produce over 200-lumens per watt – that’s right, OVER 200-lumens/watt.

Along the way it wasn’t just all about maximum light output, as the technology improved and LEDs started becoming a viable solution for regular lighting applications, the need for light quality and consistency was as important as lux output.  Lighting designers needed to be able to match color qualities seen in existing applications and when variations in quality occurred it was a costly inconvenience. The industry has worked together to define and improve Color Rendering Index (CRI) as well as tightening the binning structure of LEDs.  In years gone by, it wasn’t uncommon to find inconsistency in color from LED to LED, both within the same bin and within the same real.  Often there were even variations in the color quality within the same LED, sometimes white LEDs could have a yellow or greenish tint to the outer edge of the light. Hot binning and Silicone-Carbide SC3 technology from Cree is seen now in the Cree XT-E, XP-E2, XP-G2 and XM-L2 LEDs, and has allowed their products to be brighter and more efficient.  Hot binning, mentioned before, has been a nice addition to their data-sheets; before the forward voltages and lumen outputs were only measured at lower junction and ambient temperatures, often impossible to recreate in ‘real-world’ applications.  Slightly misleading to the unsuspecting, as an LED rated at 80-lumens with an LED junction temperature of 25C, might only end up being 50-lumens due to the higher junction and ambient temperatures in ‘real-life’ applications. With Hot Binning, each LED is measured at both 25C and 85C, giving designers a better bench-mark to work around.

Today our most popular high-power LEDs are from the Cree Xlamp LED line – the Xlamp XR-E was the first from Cree, then the XP-E, XP-G, MC-E, XT-E, XP-G2, XP-E2, XM-L and XM-L2.  Cree has proven to be a market-leading innovator in the LED industry, manufacturing the XLamp line of high-power LED modules, which have continued to advance and offer the most lumens per watt for any HB LED. In a recent post titled ‘The Most Popular Cree LEDs‘ we outlined the different models, variations and linked to our product pages where those LEDs can be purchased.