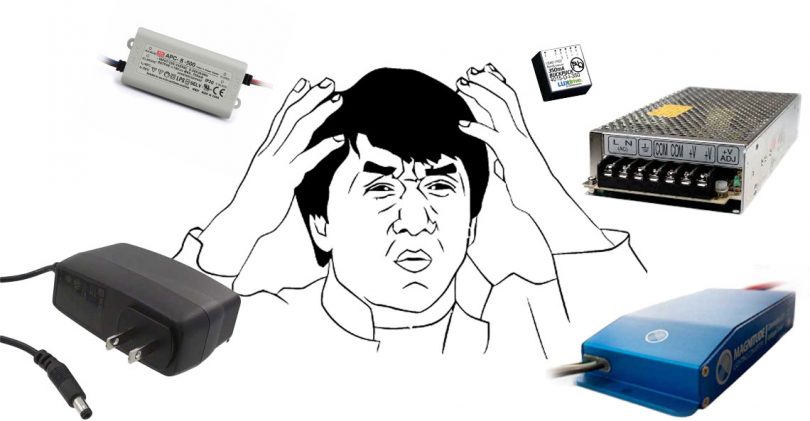 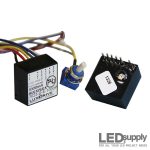 ‘What type of LED driver do I need?’ Searching for LED drivers can be more difficult than you think with the variety of options out there. There are plenty of factors to look at when choosing the one that works best for you, we have a thorough run-through of this in our guide on LED drivers here. One important choice is that of choosing a constant current LED driver versus a constant voltage LED driver. Now, it’s known that LED drivers are considered constant current devices, so why do manufacturers offer constant voltage drivers for LEDs as well? How can we tell the difference between these two?

Constant current and Constant voltage drivers are both viable options for a power supply for LED light sources, what differs is the way in which they deliver the power. LED drivers are the driving force that provides and regulates the necessary power to make sure the LEDs operate in a safe and consistent manner. Understanding the difference between the two types can:

What is a Constant Current LED Driver?

Constant current LED drivers are designed for a designated range of output voltages and a fixed output current (mA). LEDs that are rated to operate on a constant current driver require a designated supply of current usually specified in milliamps (mA) or amps (A). These drivers vary the voltage along an electronic circuit which allows current to remain constant throughout the LED system. Mean Well’s AP Constant Current Driver is a good example shown below: 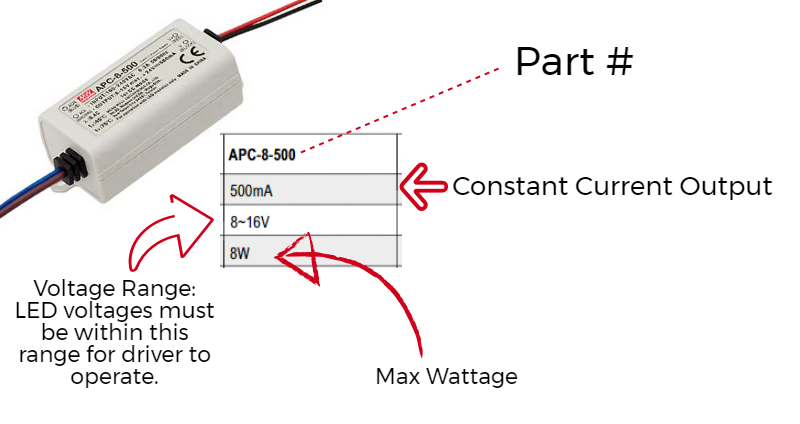 Higher current ratings do make the LED brighter, but if not regulated, the LED will draw more current than it is rated for. Thermal Runaway refers to excess current beyond the LEDs maximum drive current which results in drastically lower LED life-spans and premature burn outs due to increased temperature. A constant current driver is the best way to drive high power LEDs as it maintains a consistent brightness across all LEDs in-series.

What is a Constant Voltage LED Driver?

The LPV-60-12 will maintain a constant 12VDC if the current stays below the 5-amp maximum shown in the table. Most often, constant voltage drivers are implemented in under-cabinet lights and other LED flex strip applications but it is not limited to those categories.

So how do I know what type of LED driver I need?

The case for constant current drivers:

If you take a look at high powered LEDs, one unique characteristic is the exponential relationship between the applied forward voltage to the LED and the current flowing through it. You can see this clearly from the electrical characteristics of the Cree XP-G2 below in Figure 1. When the LED is turned on, even the smallest 5% change in voltage (2.74V to 2.87V) can create a 100% increase in current driven to the XP-G2 as you can see at the red marks current went from 350mA to 700mA. 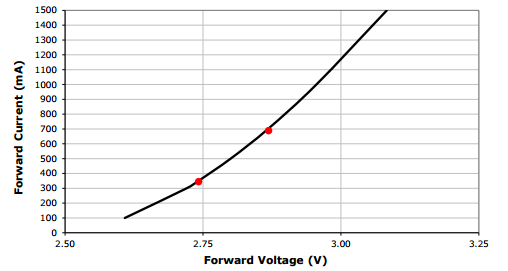 Now higher current does make the LED brighter, but it also will eventually over-drive the LED. See Figure 2 for Cree’s specifications of the maximum forward current and the de-rating curves in different ambient temperature conditions. In the example above we would still be alright driving the XP-G2 LED at 700mA, however, if you didn’t have a current limiting device, the LED would draw more current as it’s electrical characteristics changed due to temperature increase. This would eventually push the current way above the limit…especially in hotter environments. The excess forward current would result in extra heat within the system, cut down on the LEDs lifespan, and eventually ruin the LED. We call this thermal runaway which is explained in more detail here. This is the reason the preferred method of powering high powered LEDs is with a constant current LED driver. With a constant current source, even as the voltage changes with temperature the driver keeps the current steady while not over driving the LED and preventing thermal runaway. 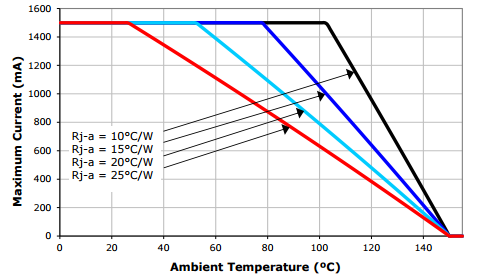 When do I use a constant voltage LED driver?

The above example is with high powered LEDs and on a smaller scale as we only talked of using one LED. With lighting in the real world, it isn’t convenient or economical to build everything by hand from a single diode, LEDs are usually used together in series and/or parallel circuits to create the desired outcome. Fortunately for lighting designers, manufacturers have introduced many LED products to the market that have multiple LEDs already assembled together like LED rope light, LED strips, LED bars, etc.

The most common LED strips are designed with a group of LEDs in series with a current-limiting resistor in line with them. The manufacturers make sure the resistors are of the right value and in the right position so that the LEDs on the strips will be less prone to the variation of the voltage source as we talked of with the XP-G2. Since their current is already being regulated, all they need is a constant voltage to power the LED(s).

When LEDs or an array of LEDs are constructed like this they will typically state a voltage to be run at. So if you see that your strip takes 12VDC, don’t worry about a constant current driver, all you will need is a 12VDC constant voltage source as the current is already being regulated by on board circuitry that the manufacturer has built in.

So when you’re building your own fixture or working with our high powered LEDs, it is of your best interest to use constant current drivers because:

You use a constant voltage LED driver only when using an LED or array that has been specified to take a certain voltage. This is helpful as:

Feel free to take a look over at our guide to LED strips that has a lot of devices that can be run from constant voltage. Also, if you need help selecting a constant current LED driver, head over to our helpful post on how to choose the right one.