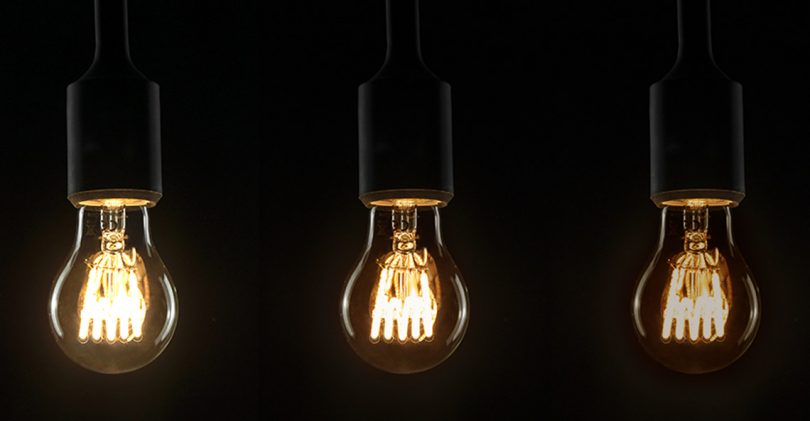 LED lights are becoming more and more common in our world today. They are a suitable replacement that offer fantastic energy savings for replacing legacy lighting in both commercial and residential areas. LEDs have been built into common bulb types so they can be retrofitted into traditional fittings in just seconds, allowing you to replace older lighting (incandescent, fluorescent, halogen, etc.) for better LED bulbs while keeping traditional fixtures if you so desire.

BUT WAIT….not all LEDs are dimmable.

This means you will need to assess your needs before choosing your LED lights. This is especially important when replacing older lighting with newer LED technology for the first time and expect them to dim.

Through this guide we will explain how you can easily determine whether an LED is dimmable or not as well as which LED dimmers to use.

Within our homes it is very common for rooms to serve multiple purposes. Kitchen’s nowadays can be a spot to cook, eat and even use as an office during the day.

Dimmable lighting gives you the flexibility to match the lighting around you to your activity. You may want a bright light when working on the checkbook but a dim, relaxing light when eating in the evening.

Dimming has also been used more within the commercial and industrial environments. Adding dimmable lighting offers flexibility to your office space and allows for optimal lighting for your employees preferences or needs. A lot of research has been focused on not only dimming but color tuning within work spaces as well, for more on tunable white lighting, check here.

Are your LED lights dimmable?

Not all LED lights are dimmable, so you need to take a look at a few things to make sure you have a dimmable bulb to start:

#1 – If you bought a finished LED fixture or bulb, check to make sure the packaging specifically states that it is dimmable. This should be stated in the description or the technical specifications of the light. If you use a non-dimmable LED on a dimmer you will get a lot of flickering and damage the bulb, limiting it’s lifespan.

A symbol similar to below is sometimes used to show a light is dimmable, unfortunately there is no specific universal symbol.

#2 – Is your dimmer LED compatible? If you are replacing incandescent bulbs with LEDs you will likely have a leading-edge dimmer. If it is an older dimmer, it was most likely designed for higher wattage lighting and will not work with low-wattage LED bulbs. You will need to choose a different dimmer in these cases….see our recommendations at the end of this post.

Why are some LEDs not able to dim?

The dimmability of an LED bulb depends on the LED driver that the light uses.

All LED bulbs have a driver that converts the electricity into a low-voltage constant current that is needed for the LEDs to work. Confused on LED drivers? Check out our full LED driver guide.

If you are building your own setup with component LEDs then you have the luxury of choosing whichever LED driver you want, with the dimming options you desire. However, when buying a finished LED fixture / bulb you are limited to the dimming options that the manufacturer chose.

Non-dimmable LED drivers only know two states: ON & OFF. If you start to change the current to an LED bulb the non-dimmable driver will try to compensate and keep the current steady. This will eventually overwork the LED driver and it will fail.

How exactly are LEDs dimmed?

LEDs dim differently than legacy lighting types which is why dimming needs to be carefully taken into account when planning an LED retrofit.

Take incandescent bulbs for example…they produce light by making a filament wire so hot that it glows. To make it dim, simply provide less voltage and the wire cools off, supplying less light. This is an example of analog dimming as you can dim from 0-100% by adjusting the voltage to the light source.

LED bulbs create light from a diode, not a heated filament. A diode only has two states: it is either ON and producing light or OFF and, you guessed it…dark.

This is why dimming LEDs is a bit different as we have to find a different way to produce a dimmable LED lighting product. There are two main methods of dimming LEDs: Pulse Width Modulation (PWM) and analog dimming.

PWM offers a full range of dimming by varying how much time the signal is ON or OFF. With PWM dimming the light-emitting-diode can only be ON or OFF at any given time. This is different from analog dimming as analog dimming varies the output power to dim LEDs.

With pulse width modulation, if you wanted to dim an LED to 80% brightness, then you would keep the LED on for 80% of the time and off for the other 20%. This makes sense that you would have about 80% the light output , but how do we not notice the LED switching on and off?

Be careful with PWM dimming especially if you are using the lighting in film or videography. Human’s vision may not catch the PWM flickering but a high quality camera will definitely pick up a slight strobe when the light is on a dim setting. You should look for a better dimming option than PWM when working in videography.

Analog dimming adjusts the amount of current going to the LED which, if you have read our guide to driving LEDs, you know reduces the amount of light an LED produces. This seems like an easier solution to dimming but sometimes an LEDs color will change at lower current levels, causing light quality and uniformity issues.

So which Dimming types should I use?

The most important part of dimming is allowing the user to adjust light levels from dark to super bright in seconds. Ultimately, it depends on what type of dimming your LED bulb and/or LED driver are compatible with but if you are building your own setup, you can choose for yourself. If you are just looking for recommendations, then skip to our Top Dimmer Recommendations below.

This type of dimming became very popular for commercial fluorescent lighting. The nice part is it can work well for LED installations as well so is a popular choice when retrofitting fluorescent lights especially. Control of the lights is performed by a dedicated DC voltage signal that ranges from zero to 10 volts. Understand the name now? This allows the controlled light to operate at 100% light output when full voltage is passed through and 0% output when no voltage is passed through. The brightness of your light changes in tandem with the voltage level of the control signal.

Leading edge dimming (also referred to as forward phase-cut, incandescent or TRIAC dimming) is the most common dimming method.

The majority of these dimmers are TRIAC Dimmers which phase cuts the AC waveform at the start (leading edge) which reduces the amount of electrical current the bulb receives.

This type of dimmer is installed in most homes as it is ideal for high voltage applications which most legacy lighting required. The biggest problem with TRIAC dimming is sometimes there is a buzzing or flickering of the light. This can happen from the vibrations that are caused from the chopped-up AC signal.

Thankfully a lot of newer TRIAC dimmers have taken this into account and taken precautions to avoid the flickering. You will see many dimmable LED drivers or LED dimmers label as a flicker-free design. Make sure you do your research and find a quality dimmer, you can start at our top recommendations below.

A trailing edge dimmer is a much less common form of dimming. This was discovered after leading-edge became the standard and is better for low voltage lighting like LEDs. Because it is such a rare form of dimming, it is not as commonly used as you might think.

Limiting the large jumps avoids the common flickering issues that happen with LEDs and TRIAC dimming. However, like we addressed above, leading edge dimming has welcomed advances in research and technology that have cut these issues out anyways.

Luckily, we have started to increase our dimming options to facilitate those looking for different options. All of our dimmers are made for LED lighting specifically…our TRIAC leading-edge dimmers are designed to smoothly dim low-voltage LEDs as well as incandescent and halogen bulbs up to 250W.

All our dimmers are very easy to install within your residential or commercial space, making it an easy LED conversion even on the dimming side of things.

Here are some dimmers that you might be interested in depending on your application. They are organized in their specific dimming types.

The 0-10V dimming is a very easy solution for those simple DIY jobs or when your driver/power source is only compatible with 0-10V dimming.

A simple 0-10V current sinking dimmer perfect for DIY applications. The wall mounted dimmer will adjust your 0-10V dimmable LEDs from 5-100%. You will want to have a separate power switch with this light as the simple dimmer does not switch off to 0% output on it’s own.

This 0-10V dimmer features Mesh Bluetooth Networking so that you can dim your LED lights straight from your smart device. Set lighting zones, schedules and other smart triggers to automate your in-home lighting with this Bluetooth Enabled 0-10V dimming device.

The best of both worlds from the two above – this dimmer connects via Bluetooth as well as has a physical wall mounted paddle switch with on/off button.

As dimming technology continues to improve for LED lighting we have been able to expand our TRIAC dimming section. These dimmers are leading-edge dimmers that are made to reduce the flicker even with lower voltage lighting like LEDs. The below dimmers are our first TRIAC dimmers ever offered on our site and we are pretty pumped about them.

Both dimmers operate off 120-277VAC and can be controlled from a physical wall switch location or through WiFi connection with a compatible smart device. Dim up to 250 Watts of lighting from 0-100% with ease and at an affordable price. Check out both models below!

Touch to dim wall mounted switch plus it will connect to all your favorite smart devices!