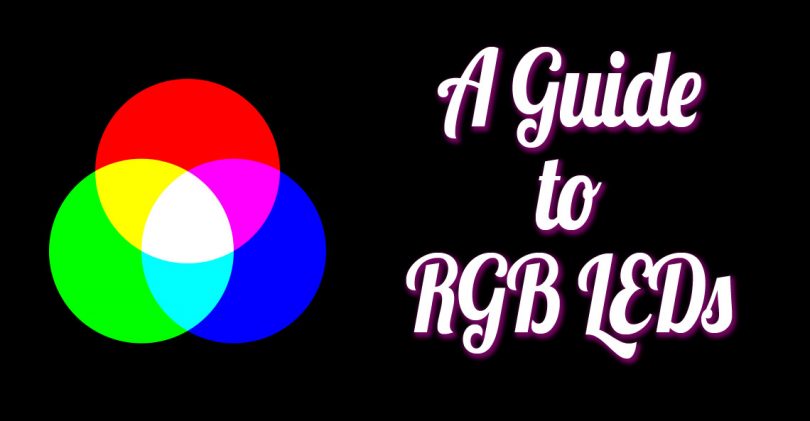 LEDs are the long-lasting, energy-saving, cool-to-run light sources that will light up our world long into the future. LEDs might not excite the average passer-by but the tricks and new control over these tiny light-emitting-diodes will be sure to ‘WOW’ plenty. RGB lighting is one of those tricks that is trending upwards in usage for a variety of applications from under-cabinet accent lighting to PC Gaming Lights.

As you will read ahead in this post, the plethora of color options and features on the market can be a little overwhelming. But with RGB LEDs, color mixing allows for millions of colors to output from LEDs that start with just the three primary colors: red, green and blue.

This model is only ONE of the two models that exist in the visible world, the one we will be paying attention to with lighting is the Additive Model. Additive color mixing involves creating a new color by a process that adds one set of wavelengths to another set of wavelengths. This is what happens when lights of different wavelengths are mixed. When all the colors are added together we see white rather than many individual colors. This is called additive because all the wavelengths still reach our eyes.

In the additive model the absence of color is black and the source of color is light photons using different metal alloys. Red and amber LEDs actually use a material system made of aluminum indium gallium phosphide (AlInGaP) whereas Blue/Green/Cyan use an indium gallium nitride (InGaN) system. This is how RGB came about, where the primary colors are red, green and blue.

How does color mixing apply to LEDS and Lighting?

An RGB LED is an LED module that can produce almost any color using these three primary additive colors: Red, Green and Blue. The simplest version of an RGB LED has a combination of 3 separate light-emitting diodes in one package, housed under a clear protective lens. This LED package will have 4 pins, one for each of the three colored diodes and one common anode (+) or cathode (-).

The 3 primary color LEDs use the principal of additive color mixing we talked about above to make more colors than we can imagine. LEDs are dimmable by nature which allows each red, green and blue color to produce all the different hues of that color.

Technically, each colored LED can produce 256 shades. It takes a high quality and premium DMX controller to actually get every shade possible but we will go over that more in the controllers section. For now, you can see that light manufacturers combine the 3 primary LEDs with their 256 shades (256 x 256 x 256) to come up with the ‘16.7 million different colors’ slogan that so many RGB lights come with.

So how does an RGB LED create the different color combinations? It is as simple as adjusting the brightness of each LED. Increase the brightness of red and blue LEDs while lowering that of green to make purple. Turn down the blue LED and turn up the red and green LEDs to make yellow. You get the deal….the color wheel below demonstrates this process and is what you can expect to see on many RGB Control Smart Phone Apps.

So, What is an RGB Strip?

An RGB LED strip works on this same principle. Numerous RGB LEDs are mounted on the strip, usually with 4 wire traces, 3 for each color and one for a common anode. The strips typically come with a standard 4-pin connector on the end (technically called a C4P connector) that will plug into an RGB LED controller…more on those in the next section.

RGB LED Strips can also create a very cool white by turning all 3 LEDS at the highest power, keep in mind this white has a noticeable blueish hue, over 6500K. Whereas RGB LED light strips do create many colors, they do still have some limitations. For example, they cannot produce brown or a soft pink. The accuracy of colors all depends on the controller unit you are using.

How Can You Control RGB LEDs and Strip Lights?

To make precise colors from your RGB light you will need an RGB LED controller, they are sometimes referred to as 3-channel controllers as they basically control the 3 primary color ‘channels’. This will make it easy to automatically tune the 3-LEDs to make the light you want. Take a look at a few different types below that we typically use:

These controllers are commonly used to control LED Strip lights. These come with a simple receiving unit that goes in between your power and RGB strips with a handheld controller that lets you control from 20-30 meters away.

You will find these with RF radio frequency connection or IR line-of-site. These controllers easily control all the LED lights connected to it, the downside is you cannot control different sections independently.

These SMART controllers connect to your smart devices via an included phone app. There is also an option to include a remote if you want two options to dim. The Multiple-Zone support lets each RGB remote (or smart device app) connect to multiple receivers, therefore allowing you to control multiple zones/rooms in your house. Easily control your office, living room and bedroom all from the same RGB controller.

These controllers also allow you more range of colors as you can adjust your Red, Green and Blue LEDs manually from 0-256 within the phone app if you would like.

A DMX controller gives you unlimited choices to control RGB lighting and is truthfully what could possibly give you 16.7 million different colors. DMX controllers used to be way too big and bulky to be feasible in a small RGB application. However, with the increase in technology, DMX controllers today can be small touch panels, wall controllers or even smart phone applications.

DMX controllers are usually used for larger jobs or anywhere that specific, numerous colors are needed. Choosing the DMX controller for you will ultimately come down to how many strips you are running and how much you want to spend. Some DMX controllers can manage thousands of channels at once.

Top 5 RGB LEDs and Strips to get you started

Now that you know how RGB LEDs work, take some time to go over our top 5 recommendations and find the right RGB light for you. Below are 5 unique items that change colors on a dime and really improve the ambience in your space.

The most common RGB light strips we sell are 12V Flexible strip lights. The strips feature 30-60 LEDs per meter on a strip that you can buy in 3-16.4ft. lengths. The strips have both a waterproof IP65 and non-waterproof IP20 version to help with both indoor and outdoor applications. These strips all come with a 4-pin C4P connector that will work with our simple remote style RGB dimmers or smart RGB dimmer options.

The newest edition to the RGB color-changing lights… max length used to be 32.8 feet, but these strips blow that out of the water and can run up to 150 feet in length! Each strip comes with a power cord attached that features an RGB Controller right in-line. The RGB strip kit comes with your choice of length with attached power cord and IR remote control. This is an easy color-changing strip option for outdoors or running around rooms and coves inside. The strip is encased in a heavy duty clear PVC housing with UV inhibitor. It is cuttable every meter so the user can customize more after purchase.

These unique LED strips are basically the same as the 12V RGB flex strips. The only difference being these feature a super small RGB LED that emits sideways on the strip. This is a great option for areas that you need to shoot the light directly up like in wall wash or backlighting applications. The smaller diodes are a bit more expensive so these run pricier than the normal 12V strip style but the convenience of side illumination makes this an easy trade off if your application calls for it.

Want to make things even more confusing? Take all those millions of colors and shades we talked about before and add in another LED. That is what these LED Strips do, while RGB LEDs use 3 colored diodes, the RGBW uses 4…the extra one being a white diode. Sometimes they are built directly into the same diode, an example of this is the Cree XML-2 RGBW LED, but our 24V RGB+W strip alternates RGB and Warm White diodes on the strip.

RGB+W LED lights will not work with RGB (3-channel) dimmers, it will need an RGB+W Controller which has 4 channels.

This is a single 20mm PCB that houses 3 Cree XP-E2 LEDs in…you guessed it…red, green and blue. The LEDS are individually addressable so that your LED drivers and DMX controller can be connected to each individual LED for supreme color mixing. Whereas the other LED strips on this list take a constant 12-24 DC voltage, these LEDS need a constant current source to run them safely. See more here on finding a driver for high power LEDs like the Cree XP-E2.