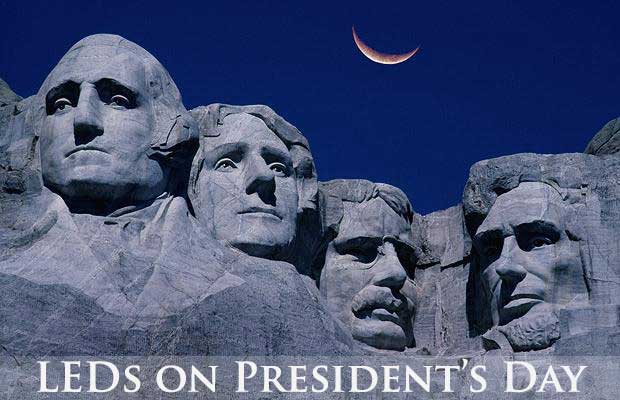 Lighting effects on Mount Rushmore were very important to sculptor Gutzon Borglum when he was constructing the Presidents on Mount Rushmore. He spent countless hours analyzing the shadows and how the sun fell so that the best viewing could be achieved during the daylight hours. Since then, artificial light has been introduced so it can be viewed at night as well. Mount Rushmore was experimented with many times to find the best light sources and it is now lit by the best…LED lighting. So in honor of President’s Day, lets take a quick look at the timeline and events that led to LEDs lighting up this famous American monument.

In 1939, during the Roosevelt dedication, many different ways of lighting the memorial were tried. Techniques varied from shooting off flares to the use of searchlights, but none were very successful.

In April of 1948, Superintendent J. Estes Suter attended a meeting regarding a way to light the memorial by searchlights. There was a time crunch as there was going to be a Rapid City Junior Chamber of Commerce celebration in May and the sponsors wanted the memorial lit for the occasion.

From May 16-23 three giant army searchlights lit the memorial from distances of about 3-4 miles away. The lights were stationed at the first pigtail bridge, Iron Mountain and the last one at Keystone. In order for the lights to maintain a communication link a State Patrol car was stationed at each light and one at the Memorial Headquarters. The power of these lights together equaled 1-billion candle power and was fairly successful as they were used through the whole week of the celebration. This success led to efforts to find a more permanent solution to light the memorial.

In December of 1948, the superintendent and three engineers met with Black Hill Power and Light Company to plan out lighting for the memorial. By August, 1949, Black Hill Power and Light had installed power lines from Keystone to Mount Rushmore and the construction of power distribution boxes began. By November of that year the power system was finished. The lighting wasn’t what had been planned as there were many unwanted shadows in places but then not enough shadows for contrast in other places.

Two banks of lights which each held 27 Crouse-Hinds and Westinghouse searchlights were located southeast of the memorial on Doane Mountain. The searchlights were rated at 1,500 watts and produced a combined total of 81,000 watts. It was thought that focusing the lights would get rid of the shadow and contrast problems, however, after all being focused it was determined that more lights would be needed still.

Searchlights were adjusted and added throughout the summer of 1950 and on June 25th a ceremony was held dedicating the new lighting system. Nearly 5,000 people attended the ceremony. And shortly after, from August 1st to Labor Day lighting programs were held daily from 8:00PM to 10:00PM.

In February of 1951, a third bank of lights was completed. This bank of lights consisted of 8 searchlights that ran at 1,000 watts each and were located to the east of the memorial. All three banks together totaled 62 lights and 89,000 watts.

As technology progressed lighting upgrades took place in 1990 and later in 1998. After the 1998 upgrade and until December of 2014 the system held a combination of 32 metal halide and high pressure sodium lights that equaled 18,800 watts.

The LED system consists of 39 fixtures with 20 light emitting diodes per fixture and 10 fixtures with 84 LEDs each for a total of over 1,600 LEDs, all being individually focused. The new system uses 2.34 kilowatts per hour compared to the old system that ran at 24.6 kilowatts per hour. This leads to savings of 90%. On top of the energy savings Musco set up a ten year warranty on parts and labor.

This is a cool way we can easily see LEDs impacting our history. With this new system Mount Rushmore has the best possible light at night time hours so viewers can come and enjoy even when the sun isn’t out. On top of that its saving plenty of energy and even cutting down on CO2 emissions. I think we can all be proud of this and watch as other monuments, stages, buildings, etc. start capitalizing on the technology that comes with LEDs….we’ve come a pretty long way since having to light the monument through giant army searchlights. Here are some other American monuments that have been revamped with LEDs: LEDs in the USA. Well done America…and Happy Presidents Day (1 day late)!