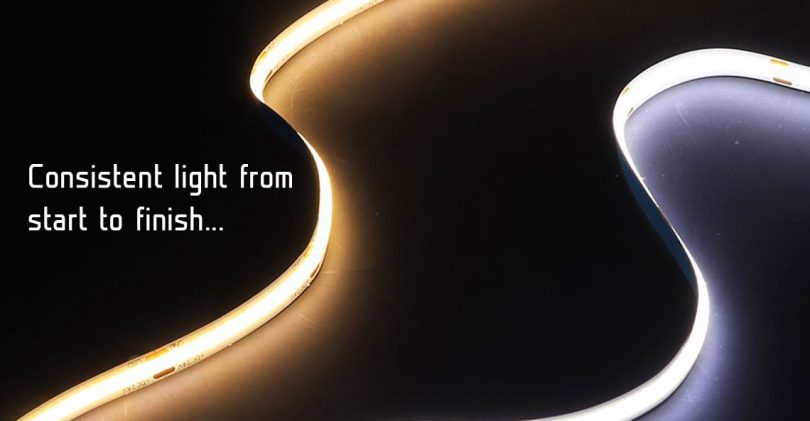 LED Strips have been a wildly popular DIY lighting solution for many applications over the years. That is why we are so pumped on the newest LED Strip tech – COB Flexible Strip Lighting. If you have never read our LED Strip Light Guide than you should start over there first as that will cover all the basics of LED Strip lighting in general. If you already are familiar with strip lighting and are excited to learn how COB strips make the world of LED lighting even better than read on!

In the LED world, COB is the abbreviation for Chip on Board, which basically means to package the LED die directly on the circuit board (PCB). The ‘Chip on Board’ LED used on flexible strip lights is also sometimes called a flip-chip.

Flip chip LEDs are basically a bare bones approach to LED structure. Take a look at the normal 5050 SMD (surface mount device) LED, it has a bulkier plastic reflector that encapsulates the LED diode itself and then covers that with a phosphor coating. The ‘flip chips’ that make up COB LED strips cut everything from their design except an LED chip, the yellow phosphor covering, and connection pads. This condensed design leads to a significant reduction in size, allowing them to be packed closer together and further miniaturize LED based lighting.

How are COB LED Flex Strips Made?

The strips are manufactured with the same quality PCB as our other LED Flex Strip lights. Flip chip LEDs are then placed side by side down the center of the strip light, so tight that there are 512 LEDs for every Meter of strip! The strips are finished after a phosphor layer is placed over the LEDs. This helps balance out the color temperature while also acting as a protective layering for the tiny flip chip LEDs underneath.

Now that you have a basic understanding of how this new light technology has been produced, it is time to see what makes them superior or better for certain strip light applications.

No LED Hotspots, even in tight spaces!

One of the biggest complaints about your traditional LED flex strip is the hotspots throughout the strip. A Hotspot is the term for the brighter areas through a fixture or strip where you can clearly see where the light is coming from. Light is much more inviting and attractive when it looks like a smooth source of light, not a spotty mess.

With 5050 SMD Flex Strips the larger sized diodes are packed close enough so that at a distance the light is spread out and consistent on the surface being illuminated, but if the lights are too close to the surface or the strips themselves are visible, the hotspots are an eyesore that cannot be ignored by the human eye.

The strips 512 LEDs/M it would be pretty hard to pick out any hotspots on the COB Flex Strips. The strip illuminates a smooth, consistent light from start to finish. The uniform light has no dark spots and is much more attractive to the human eye, giving off a steady light even in the tightest of places. In fact, the only real way to see hotspots is to look at the back of the strip where it is easier to see the individually placed flip chip LEDs. The only other way you are going to see the individual diodes is if you dim the strips down to about 5% light output.  This makes COB Flex Strips ideal for applications where:

That’s right, these COB LED Flex strips are even brighter! At 1400 Lumens/M these are even brighter than our high-density strips! The consistent, bright light also emits at a wider angle thanks to the flip chip LEDs not being encapsulated in a plastic holder like SMD LEDs. This lets them emit some light out the sides so that they spread at 180 degrees off the strip. Wider light angle means more light for you so this is important in the long run for brightness as well!

The flexibility of these strips is much better than other flexible strips because of the smaller diode size and even distribution of weight. The diodes are so small and tightly spaced that any point of the strip is the same as the other. The uniformity makes it easy to set up strips without having to plan around a 5050 SMD LED sticking out where you don’t need it. This added flexibility will make them easier to fit into tight areas and turn around corners in your application.

They are also much better at distributing heat as they are mounted directly to the flexible PCB board. This helps them spread their heat down into the PCB rather than keeping it all locked right in the light source itself. This reduction of thermal resistance within the high-density circuit greatly improves the lifetime of the LEDs.

The advantages of COB Flex Strips should be pretty clear if you have been paying attention, so now lets get into some of the specifics about this strip. If you are familiar with LED strips than a lot of this will sound familiar but there are a few differences with this strip so it is a good idea to check out the tips below before working with COB Strip Lights.

The COB flex strips take 24VDC. This is a changeup from the norm as our other flex strips are 12VDC powered. The extra voltage is needed with so many diodes packed within the circuit. Please take note to always use 24V input with these strips. Luckily, we have plenty of 24V power supplies in a wide range of styles:

The higher input voltage actually gives another added benefit as well. It allows for longer runs with the COB Flex Strips. They can actually be connected end to end as long as 2 full reels (32.8 ft.)! This makes it easier for applications needing long straight runs. If you need more than the 32.8ft please remember to wire your LED Strips in parallel so you don’t have any voltage drop along your setup.

The Strips can be cut like our other strip lights. Please only cut along cut marks which are marked on strip every 2.46”. This makes it so you can cut strips to custom sizes or add gaps within your application. The strips can be used again after cutting, the best way to make connections is soldering but if that isn’t an option our EZ COB Strip Connectors will do the trick.

They also look fantastic in Red, Blue and Green which are also available.

The flexible PCB is 10mm wide and the phosphor LED coating sits about 1.6mm high off of the PCB.

If traditional LED flex strips just won’t cut it for your job then I suggest looking to COB LED Flex Strips. They are new to the market but these LED strips will start becoming commonplace in the LED Strip world. Please feel free to email us with any interest or questions concerning COB LED Flex Strips.