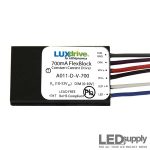 What makes the LUXdrive A011 FlexBlock LED driver so powerful…

The extremely compact dual-mode FlexBlock is a true current regulated LED driver for powering high-power or high-brightness (HB) LEDs or LED arrays; because the forward voltage of LEDs can change based on several environmental factors as well as the age of the LED, it is important to use this type of driver in an LED system to help avoid thermal runaway. The FlexBlock includes a fast response current-sensing circuit for applications where flashing or strobe of LEDs is required and its dimming input is also compatible with 0-10V wall mount dimmers like the A019 low voltage dimming control.

BUT…Here is what sets the FlexBlock apart from other constant current LED drivers.

The A011 FlexBlock is capable of two different modes:

Buck-Boost Mode
The versatility engineered into the FlexBlock allows it to handle LED loads that are ABOVE, BELOW or the SAME voltage as the power supply. This standard mode, called Buck-Boost mode, is recommend for loads up to 6 LEDs, but has the ability to output: 48Vdc minus the input Voltage. For example, if your input voltage is 12Vdc, the FlexBlock technically has the capability to output 36Vdc; at the same time and in the same mode, the FlexBlock could also run only 1-4 LEDs from 12Vdc. 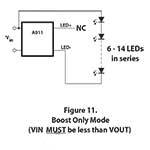 Boost-Only Mode
The FlexBlocks most efficient mode is Boost-Only. In this mode the FlexBlock LED+ output is not used, and the positive end of the LED load is instead connected to Vin+ (shown in figure 11). In Boost-Only mode the output voltage can reach 48Vdc, but it is extremely important that the Vin be less than the Vout. 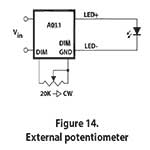 Dimming & Controlling Features
Dimming with potentiometer: The simplest method for dimming the FlexBlock is with a 20K Ohm potentiometer. This gives a 0%, 5-100% range of dimming. Figure 14 shows an example connection. Multiple FlexBlock can be dimmed together, however the value of the potentiometer should approximately be (20K Ohm / # of FlexBlocks).

Dimming with 0-10V wall dimmer: The preferred choice of dimming a FlexBlock is with the A019 Low Voltage Dimming Control module or another commercial wall dimming 0-10V control; the A019 can easily handle several drivers. The 0-10V control can also be supplied by a commercial lighting controller that has current sinking 0-10V outputs. 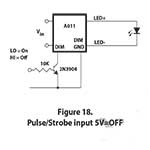 Advanced Control with Pulse Width Modulation (PWM): The 0-10V input can be Pulse Width Modulated (PWM). Figure 18 shows how interfacing a micro-controller can easily be accomplished with a 2N2904 or equivalent transistor. A PWM frequency of 200Hz is recommended. The same configuration could also be used to pulse or strobe the LEDs with a TTL or CMOS logic signal. 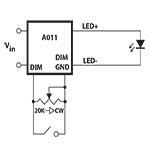 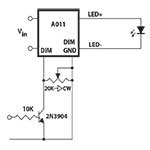 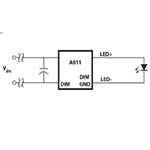 Connections
The LEDs being driven should be located as close to the FlexBlock LED output as possible. 18AWG wire should be adequate for most wiring, but a heavier gauge should be considered when long leads are necessary. The power input wires should also be kept short. Where the power source is located several feet from the unit, a 100μF or larger, 50V capacitor may be required across the input terminals as shown in Figure 20.