History and Transition of 0-10V Dimming

This type of dimming first came into play as an early fluorescent dimming system. Big systems needed a way to dim down fixtures through electric and magnetic ballasts easily so that all of the lights could be dimmed at once and there was no need to replace anything more than the bulb when lights were replaced. 0-10 volt dimming created a solution to this and was low cost and low maintenance.

These 0-10V dimmers are still used in commercial applications for fluorescent lighting and occupancy/daylight sensor systems but are now becoming popular with the newest lighting technology, LED. This has become the norm for dimming and is widely integrated as it is one of the simplest systems and is recognized by the IEC so it is acceptable to all engineers.

0-10V dimming is a low voltage dimming system that works so the control signal is a DC voltage that varies between zero and ten volts. The lighting systems that are being controlled should scale the output so that at 10 volts the controlled light should be giving it’s full light output, and at 0 volts it should be at its dimmest level.

When choosing a low voltage dimmer first you want to make sure that your system will work with a 0-10V dimmer. For LEDs this depends on the LED driver you are using, luckily most LED drivers use 0-10V control signals to control the LEDs. Some LED drivers use 0-5V dimming like the LuxDrive BuckPuck Drivers, however, these are current sourcing drivers and our 0-10V dimmer will still work with this type of driver. So if you have a LED driver that uses 0-5V dimming just make sure it is a current sourcing driver and you are good to go.

Another factor to consider is that the dimming range of many LED drivers or ballasts are limited. Take the LuxDrive BuckBlock for instance, this LED driver can only dim the light output from 100% down to 5%. In instances like this your light output would still be slightly visible or at least running power to the light still which is why many dimmers have a switch or relay available to kill power to the system when the dimmer is turned down all the way.

A lot of 0-10V dimmers have either a built-in or external line voltage relay. In these dimmers they either have a separate switch that can kill the power or you will be able to tell they have one as when you turn the dimmer down all the way you will here a light click that is actually the relay cutting the power so that 5-10% isn’t still running. Unfortunately for consumer this relay in the dimmer tends to jack up the price. Overall you will always want a way to cut the power as you don’t want to have your lights running (no matter how low) when you don’t need them. Our A019 0-10V LED lighting control does not have a relay, part of the reason why we can 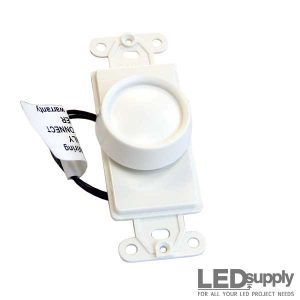 offer it at such a value price point, but we do have ways of making it work almost as a relay does.

If you pair our 0-10V dimmer with the LuxDrive drivers it will work in this way. Yes the LuxDrive drivers can be dimmed from 100% to 5% output but they work in a way so that when you adjust the dimmer to only 1V or less the drivers voltage output shuts off and goes to zero. In other words the 0-10V dimmer is acting like a 1-10V dimmer making it so that the LED driver will supply absolutely no power to your LEDs when turned down all the way.

We’ve talked a lot about 0-10V dimming but now lets just run through some of the benefits to using 0-10V dimming especially with LEDs. We specifically reference our A019 0-10V Dimmer that we have talked about throughout this post.

So as you can see 0-10V dimming is a great low voltage dimming solution to control LEDs and is great for the industry as LEDs continue to replace other lighting systems as it uses the 0-10V system that a lot of commercial applications already use.