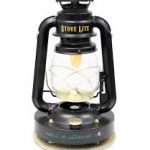 For the last few years, a close group of engineers from Vermont Technical College have been experimenting with a technology called thermoelectric generators (TEG).

In 1821, thomas Johann Seebeck discovered that a thermal gradient formed between two dissimilar conductors produces a voltage. At the heart of the thermoelectric effect is the fact that a temperature gradient in a conducting material results in heat flow; this results in the diffusion of charge carriers. The flow of charge carriers between the hot and cold regions in turn creates a voltage difference.

The Stove Lite is a traditional looking lantern that is anything but conventional. Place it on your wood stove and light your home with beautiful and efficient LED light using the power generated from heat – as long as your wood stove is hot, the Stove Lite generates electricity and light.

The Stove Lite Pro model includes an on-board battery, dimming-control, on/off switch and a tiny USB charging connector, known as a Micro-B socket. This port is commonly found on cellphones, tablets and other portable devices. This port will allow the Stove Lite Pro to be charged externally via an AC wall adapter or automotive charge port.