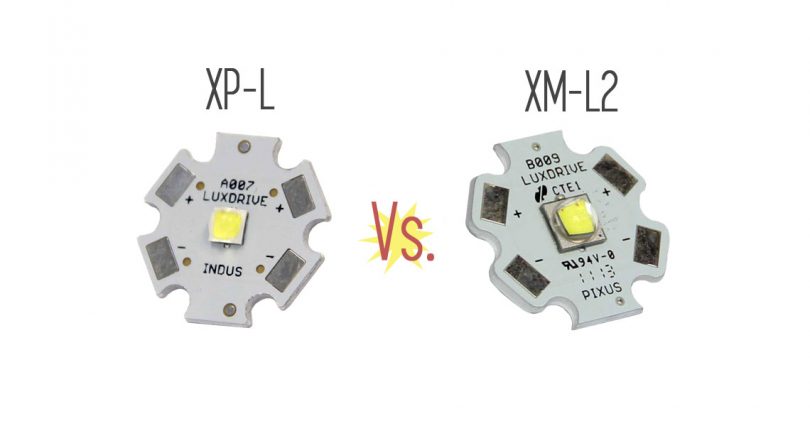 We get the ‘What is your brightest LED?’ question a lot here at LEDSupply which is usually followed up with more questions about specific LEDs, why they are better, how they are compared to another type of LED…you get the picture. One comparison we get a lot, however, is that between the Cree XP-L and the Cree XM-L2. If you look at both of their spec sheets, you could almost mistake one for the other as they have extremely similar characteristics and even the same specs in a lot of areas. This isn’t much of a surprise as the Cree XP-L actually uses the XM-L2 die, just in a smaller XP sized package. ‘So what’s the deal?’ a lot of customers ask, ‘Is there even a benefit to the XP-L or is this just a minor upgrade that is trying to be passed off as more in order to improve sales?’ The Cree XP-L is, indeed, a breakthrough. In this post I will briefly run through a couple of the differences over the XM-L2 and explain some of the advantages it brings.

So to answer the question, yes the Cree XP-L is brighter than the XM-L2 and is actually the brigthest LED we carry. Below I have compared the Lumen output from the Cree data sheets. I’ve compared lumens using the Cool White XP-L V4 bin and the Cool White XM-L2 T6 bin. These are not the brightest bins, as you will see, but they are the bins that we usually carry and are more than likely the bins we will send you if you purchase them.

From the charts we can see that at 1500mA the XP-L outputs 52 lumens more and at 2000mA the XP-L outputs about 63 lumens more. This shows that the XP-L has about a 9% increase in lumen Output over the XM-L2. This isn’t extreme at all which is why a lot of customers ask whether it is even worth switching to the XP-L. If you have a fully capable XM-L2 then I’d say there is not a big enough difference to take on the costs to switch now but as you can see the XP-L is brighter so if you are trying to get the absolute most, even paying attention to small increases than the XP-L is your best bet for brightness.

The Cree XP-L does have better efficacy at more lumens per watt, thanks to the higher lumen numbers. However, the XP-L has a higher forward voltage than the XM-L2. Running at 1500mA the XP-L has a forward voltage of about 3.075 whereas the XM-L2 is at about 3.05. It is a very small difference that could even be credited to the fact that the XP-L footprint is smaller and therefore has a smaller thermal path and doesn’t transfer heat quite as well. This is very negligible unless you get up into the max current ranges (2.5-3A).

Cut sides on the XP-L

The biggest and most significant difference is in the size of the LEDs. As said at the beginning of the post, the XP-L actually uses the XM-L2 die but in a smaller package. The XP-L technology allowed for the bigger die to be placed in a smaller dome that is actually cut off a bit on the sides to make it fit on an XP sized footprint. The dome is bigger than an XP-G2 and other XP models as it has a slightly wider diameter and is taller but the cut edges of the dome make it so they can fit an XP sized footprint (3.45 x 3.45mm) and therefore can be used in XP based fixtures and modules. The smaller footprint also made it so we are able to offer a 3-up star board whereas the XM-L2 is too large and is only available in a 1-up LED star. This allows for more LEDs in a smaller area and therefore even more light output. Take a look at the pictures below to get a feel for the sizing difference.

So overall, you’d be right in saying there isn’t a huge difference between these two LEDs. However, in terms of light fixture manufacturers and LED DIY enthusiasts this smaller package means a lot. It means that if fixtures are already made with XP based LEDs then it is possible to get XM-L output from a smaller XP sized LED. This will help in not having to change designs too much and in fitting these in smaller spaces while using Carclo Optics. The smaller footprint also allows for more in a single space, therefore increasing lumen output even more. I hope this has answered your questions, we are always looking for your input so let us know your thoughts on this subject or what you think in the comments below.